Topics: Biology, News from the EIROs, Physics, Science and society

Capturing the moment: to use artificial photosynthesis to produce clean energy, we need to better understand it first. Learn about how X-ray free-electron lasers can help.

Photosynthesis is a remarkable process that enables plants to effectively convert the sun’s energy into chemical energy. It uses molecules abundant in the atmosphere to produce energy that can be stored, and even by-products of photosynthesis are beneficial for other organisms. The latest solar-energy technologies do not come close to fulfilling these criteria, so imagine if we could mimic photosynthesis to meet our own energy needs. Before we start, we need to understand precisely how photosynthesis works. But photosynthesis is a complex process, involving large assemblies of proteins, and occurs on an unfathomably short timescale, so how can we get a true picture of what is going on?

What do we know about photosynthesis?

Photosynthesis is the process by which green plants, cyanobacteria, and algae capture and use light energy to convert carbon dioxide and water into chemical energy in the form of sugars. It is summed up in the following equation:

The chloroplast, a cell organelle unique to photosynthesizing organisms, is the solar-power centre of the plant. It contains two types of large, light-sensitive, protein machines called photosystems – photosystem I (PSI) and photosystem II (PSII).

The photosystems, located in the thylakoid membrane, capture photons of light and move them to chlorophyll molecules, which absorb the photons, become excited, and release electrons. The electrons move through an electron-transfer chain from one photosystem to the other, before they are used to create energy (by converting nicotinamide adenine dinucleotide phosphate (NADP+) into the reduced form, NADPH) for the Calvin cycle to produce sugars from carbon dioxide. Water is also a crucial component; PSII splits water molecules to release oxygen molecules and hydrogen ions. These ions build up to create a charge difference across the thylakoid membrane, and then move across the membrane via adenosine triphosphate (ATP) synthase, creating energy in the form of ATP.

If we want to build our own solar-energy cell, we need to know more about the 3D atomic structures of PSI and PSII and what goes on inside them. While researchers have studied photosynthesis for decades, it has been hard to pinpoint some of the details. Scientists can use high-powered X-ray beams to create models of a protein’s structure, but first the proteins must be crystallized. Large protein crystals work best, but growing them is not always easy. Photosystems are huge protein complexes – PSI can consist of around 26 proteins, 288 chlorophylls, and 380 other molecules – and large proteins are especially difficult to crystallize. Membrane proteins, like PSI and PSII, are even more difficult to crystallise. At best, large proteins and membrane proteins produce tiny crystals, which need long exposure times, so the powerful X-ray radiation could destroy the proteins before we get our image.

The European XFEL is an X-ray free-electron laser that generates extremely short and bright X-ray flashes at a rate of about 27 000 times per second. These X-ray flashes are around a billion times brighter than those produced at synchrotrons – another type of X-ray light source. The European XFEL is located in underground tunnels that cover a distance of 3.4 km, from the Deutsches Elektronen-Synchrotron (DESY) campus in Hamburg to the neighbouring town of Schenefeld. To generate X-ray light, electrons are first accelerated to almost the speed of light. After they have raced through the 1.7-km-long accelerator, the electrons pass into structures called undulators. These consist of a series of alternating magnets that force the electrons to go on a tight zigzag course. When electrons are sent on a curved path by strong magnets like this, they emit laser-like X-ray light. Scientists from across the world come to the European XFEL to use these X-ray flashes for their research.

Light produced at the European XFEL is extremely bright and is generated in very short bursts that arrive in quick succession, which means that it can be used to overcome some of the challenges associated with the imaging of large membrane proteins, such as PSI and PSII. At the European XFEL, it doesn’t matter if the crystals are small. In fact, a method called serial femtosecond crystallography has been optimized to use microcrystals. First, a jet of tiny crystals is fired into the path of the X-ray beam. The crystals are then blasted by a flash of X-ray light, creating an image of each protein before the powerful radiation destroys it.

The individual images are put together to create a detailed composite image. Scientists have already used the fast rate of flashes produced by the European XFEL in this way, and XFELs have been used to create the most detailed images we have of PSI.[1,2]

However, even a high-quality image is just a single moment captured in time. It allows us to capture a detailed before and after shot, but what we really want is to be able to see these proteins in action, to understand what the intermediate steps are. Only then can we begin to understand, for example, how PSII splits water. Photosynthesis is, however, an extremely fast process. Energy transfer between different parts of the photosystem takes around 500–1000 femtoseconds. A femtosecond is one quadrillionth of a second or 1 x 10−15 s. For comparison, a mosquito can beat its wings up to 1000 times a second, so each wingbeat takes 100 000 000 000 (1 x 1011) femtoseconds. The entire process of photosynthesis is over before a mosquito flaps its wings.

A photographer taking images of a football match chooses the shutter speed of their camera to match the speed of the action, to ensure they can take a series of sharp images in quick succession. If they get enough good images, the story of the match can be pieced together later. Likewise, to document the progression of photosynthesis, we need to have a ‘camera’ that is fast enough to capture that movement. The X-ray flashes generated at the European XFEL are so short that scientists can take sequences of images of processes occurring on the femtosecond timescale and stitch them together into a ‘molecular movie’.

With light-sensitive proteins, such as PSI and PSII, the reaction can be triggered by exposing the protein crystals to a light pulse. X-ray flashes are then timed to strike crystals at a series of timeframes throughout the reaction, so scientists can ‘take’ images of different stages of the process, as it unfolds.

At the European XFEL, scientists have tested this experimental setup using another light-sensitive protein and will now use the setup to make molecular movies of PSI and PSII.[3, 4]

Unlike plants, our mobility and industrial systems aren’t powered by sugar, but imitating parts of the photosynthetic process would allow us to produce useful products. We could split water to create hydrogen, which could be used to fly planes or make steel, or we could use carbon dioxide to create fuels, such as methanol, for vehicles or feed these fuels into chemical processes. Scientists can already mimic some of these processes in the lab. With our latest understanding of physics paired with high-precision engineering, we can begin to reveal the secrets of this amazing natural process and achieve new efficiencies for a sustainable future.

[2] Using the European XFEL to shed light on photosynthesis: https://www.xfel.eu/news_and_events/news/index_eng.html?openDirectAnchor=1733&two_columns=0

– Gupta D, Armstrong D (2021) Bringing the beauty of proteins to the classroom: the PDB Art Project. Science in School 54.

Rosemary Wilson is a science communicator and writer based in Germany. She currently works with the communications group at the European XFEL, before which she worked at the European Molecular Biology Laboratory (EMBL) in Hamburg. A long time ago, she did her PhD in plant molecular phylogeny, studying the molecular relationships within a group of liverworts. 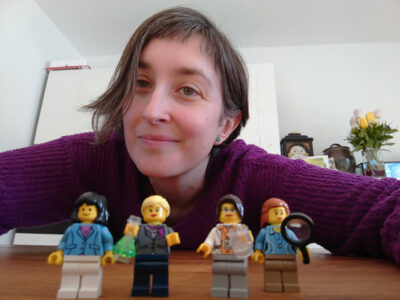 When teaching science, we need to go deep as well as wide into the subjects. This article is an excellent opportunity to see how knowledge in chemistry, biology, and physics can be used side by side to understand the usefulness of X-ray free-electron lasers. It is also a good example of how science can support sustainability as it describes some research into artificial photosynthesis. As citizens, we also benefit from knowing more about the scientific collaborations between our European countries, such as the XFEL.