Science fiction can be an engaging starting point for scientific discussions. Learn how one research group is using Star Wars to introduce students to accelerator science.

Films and books create the chance to explore new experiences and science fiction is a great opportunity to create an environment in which to ask questions such as ‘what if …?’ and ‘how could you do that?’

These science questions emerge naturally out of discussion about the film and may even encourage the quiet film buff at the edge of the group to voice an opinion!

A number of TV series and films may have enthused your own interest in science. For us at the University of Liverpool, it has been Star Wars. Although strictly science fantasy rather than science fiction, there are a number of memorable scenes in the Star Wars films that we have used as analogies to introduce groups of young people to the concepts behind cutting-edge accelerator research.

As part of our outreach program, we created a themed workshop event with hands-on experiments and characters in costume to facilitate the discussions. The concept has worked well for all ages and abilities. We have run this as an event for several years and plan to use this winning formula again.

To capture the excitement of these ‘big science’ experiments, we have also created some films of our own, which focus on the people behind the science, in particular, young researchers from across the world. This diversity increases the chance that young people will see someone like themselves involved in research.

This could be replicated on a smaller scale – clips from the films are readily accessible and can be used with certain caveats: the films cannot be used to promote the event, the event must not be for-profit, and there can be no indication that the event was endorsed by Lucasfilm or Disney.

The most famous accelerator is the Large Hadron Collider (LHC) at CERN, which crashes beams of particles together to see what emerges. By increasing the power of collisions to close to that of the ‘big bang’, it has been possible to explore what happened at the beginning of time itself, and the discovery of the ‘God particle’, or Higgs boson, is the most well-known outcome.

Star Wars is a good vehicle for communicating the knowledge frontier being explored by accelerators and the futuristic applications for discoveries. Some suggestions follow, and a collection of accessible videos and articles relating to these phenomena have been placed in the Resource section.

Star Wars example: May the Force be with you

In the films, the Jedi and the Sith are both capable of using a mysterious power called the Force, which exists in two types. The Jedi use the light side of the Force and the Sith use the dark side. The most dangerous Sith Lord, Darth Sidious, was able to create ‘Force lightning’, the ability to cast bolts of electricity-like Force energy from the tips of his fingers.

In the real world, there are four fundamental forces: gravity, the weak force, the strong force, and electromagnetism.

Particle colliders are one of the main tools used to study these forces to better understand our universe. A discussion of these forces can then be used to introduce discussions about the planned upgrade of the LHC and future machines, such as the Future Circular Collider, which will have a circumference of 80–100 km, many times the size of the LHC.

The Van de Graaff generator, the early accelerator, creates ‘forked lighting’ that can be a hair-raising experience. It is exciting and dramatic to use, and the equipment is readily available to borrow or hire.

In the original Star Wars film, the rebels have to destroy the Death Star (the giant space station that destroys planets) by firing their proton torpedoes into an exhaust port in a trench, as this would initiate a damaging chain reaction, leading to its destruction. To do this, Luke Skywalker needed to pilot his X-wing fighter into the gap and fire a proton torpedo, then use the Force to guide the missile to the target.

Proton radiation therapy offers many benefits over conventional X-ray photon radiotherapy in targeting and killing cancers. The proton beams pass through healthy tissue and then deliver a dose of radiation at the target, a process determined by the Bragg peak. Current research is directed at accurate monitoring of the beam.

At the Science of Star Wars event, a proton minigolf activity invites the participants to hit the ball (proton torpedo) to reach the putting cup (Death Star/tumour target). The target is hidden from view to lower the chances of success, and the participants choose what diagnostics and monitoring systems they want to use to help them destroy the Death Star/treat the tumour.

At the end of The Empire Strikes Back (the second film), Han Solo is captured by Darth Vader and frozen in carbonite for delivery to a crime lord. At the start of the next film, Return of the Jedi, Luke and Leia thaw him out again.

Extreme cold could also be used to facilitate another Star Wars phenomenon: levitation. In Return of the Jedi, there is a chase through a forest on vehicles called speeder bikes, which levitate.

Very cold temperatures are needed to make accelerators work, to ensure proton beams do not hit any residual gas particles when they circulate. As such, the LHC is cooled to −271°C (colder than outer space) to create a vacuum.

Cooling is also used to make materials superconducting, known as the Meissner effect. As the material is cooled, the magnetic field is pushed out, creating a superconductor capable of transporting very high currents. Superconductors are used in high-field magnets for bending and focusing beams, as well as in ultrasensitive monitors to measure the smallest magnetic fields. This phenomenon is used in electrodynamic suspension Maglev trains.

Cooling can make materials superconducting, and they become perfect diamagnets – objects that are repelled by magnetic fields – and can levitate if the field is strong enough.

Superconducting materials also exhibit some funny effects. One of them is the so-called flux pinning, whereby magnetic field lines are trapped and locked inside the superconductor, keeping it in place and allowing it to levitate above a magnetic surface.

At the Star Wars event we run, we use this phenomenon to construct a speeder race. A Lego speeder bike is put on top of a track made from a superconducting ceramic material called YBCO (yttrium barium copper oxide), which can operate at liquid-nitrogen temperatures. This track is cooled until the speeder bike begins to levitate. If two different tracks are used, two pilots (one from the Alliance and one from the dark side) can race each other.

What will the future bring?

Physics of Star Wars events have fascinated pupils and teachers alike. As Count Dooku said to Yoda: “This is just the beginning!” This is no doubt also true in the case of science, as many more researchers are needed for accelerator science.

By sharing our resources in future issues of Science in School, I hope that more teachers will incorporate Star Wars into physics teaching and many more pupils will be inspired to discover more.

Prof Welsch is head of the Department of Physics at the University of Liverpool and founder of the QUASAR Group. His research focuses on the development of particle accelerators and light sources and devices that can monitor the properties of charged particle beams.

His rich career has included several years at CERN and leadership roles in ground-breaking international projects on beam diagnostics. He is also a passionate Star Wars fan. 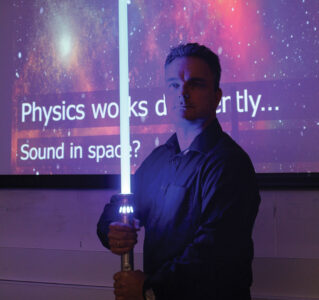 Carsten Welsch and his lightsabre
The Cockcroft Institute

Sometimes it can be difficult to motivate students to study physics. However, films, TV series and books can offer a great opportunity to ask questions related to this science in order to understand if situations that appear in them could be real or are completely impossible.

In this article, we find several proposals based on scenes in the Star Wars films to introduce the concepts behind cutting-edge accelerator research. For each one of them, it is explained the real science that can be found in the scene and how it can be demonstrated. The text can inspire teachers looking for new ideas and topics to increase students’ interest in science and technology. It can also be a starting point for discussing the differences between science, pseudoscience, science fiction and fantasy.

This article could be used to show students physics is essential to understand some things that happen in everyday life.